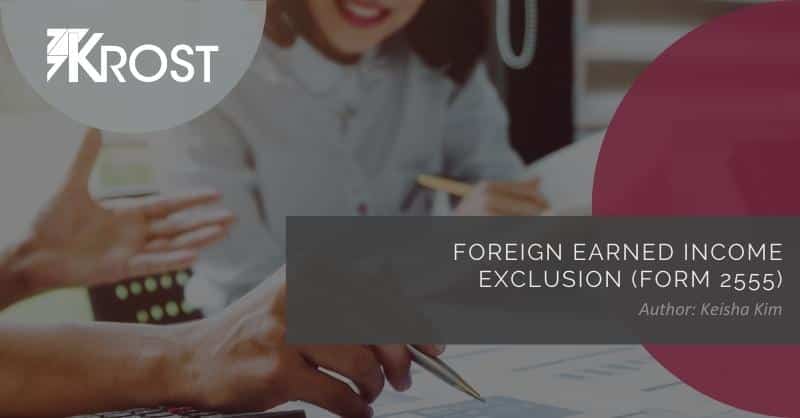 The US tax system requires all its citizens and permanent residents to file tax returns based on worldwide income, regardless of where they live. As such, if a person lives overseas and files taxes in a foreign country, the person also needs to report the foreign income to the IRS by filing US taxes.

In an effort to mitigate the risk of double taxation, the IRS has come up with several provisions that can benefit US expats when they file their US federal tax returns. Among the provisions are Foreign Earned Income Exclusion and Foreign Housing Exclusion/Deduction.

Examples of Foreign Earned income are wages, salaries, professional fees, commissions, and other payments to you for services rendered by you.

Foreign earned income does not include unearned income such as passive/investment income, pension/annuity/social security payments, payments received as a military or civilian employee of the US government or agencies, or payments for services rendered in international waters or airspace.

To claim the benefits, you must have foreign earned income, your tax home must be in a foreign country, and you must meet one of the following:

Third, one needs to determine if the housing exclusion/deduction is properly calculated. There is a limit on housing expenses which is 30% of max foreign earned income exclusion (for 2021, $108,700 x 30% = $32,610). Also, the number of qualifying days during the tax year, and the ratio of employer-provided amounts/total foreign earned income come into play in calculating the Housing Exclusion.

Use Form 2555 to compute Foreign Earned Income Exclusion and Housing Exclusion/Deduction. One cannot exclude or deduct more than the amount of foreign earned income for the year. Attach Form 2555 to Form 1040 (or Form 1040-SR) when filed.

This article is only a summary of Foreign Earned Income Exclusion and how it can be utilized in your tax situation. If you are an expat with potential taxable income in the US or if you need assistance in preparing your US tax return and analyzing your potential tax situation in the US, please contact our International Tax Principal, Evelyn Fernandez at [email protected].

Evelyn Fernandez, CPA, MST, Principal
Tax, International Tax, Manufacturing & Distribution
Evelyn is a Tax Principal at KROST. She has been in the public accounting profession for over 15 years. Her areas of expertise include tax planning and compliance for high net worth individuals, international entities and individuals, multi-state taxation, partnerships, S corporations, trusts, nonprofit organizations, and entertainment businesses. » Full Bio