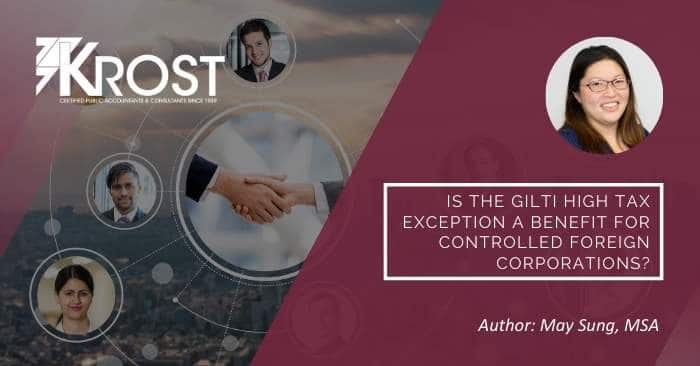 Navigating the ins and outs of US taxes as a US shareholder of a controlled foreign corporation (CFC) has been complex in the last couple of years due to changes in regulations from the IRS. Taxpayers need tax planning to determine the best strategy to mitigate the CFC’s tax liabilities.

In 2019, the IRS and Department of Treasury introduced the Global Intangible Low-Taxed Income (GILTI) tax. The initial GILTI tax was written into the IRS regulations to discourage multinational foreign corporations from shifting their profits to low-tax jurisdictions abroad. With the GILTI tax regulation, many taxpayers who are US shareholders of a CFC have had to reevaluate their entity’s structures and pursue different avenues to diminish their overall tax on their CFCs.

While there are many benefits of utilizing the GILTI high-tax exclusion to lower the CFC’s tax liabilities, there are also some drawbacks. Each CFC’s qualified business asset investment (QBAI) and foreign taxes paid or accrued can no longer be included in determining each US Shareholder’s GILTI taxes. QBAI is defined as the average of the adjusted basis in specified tangible property subject to depreciation used in a trade or business. Instead, when determining GILTI tax liability, the aggregate of all CFCs of the US shareholder needs to be included in determining the net basis. For example, if a high-tax CFC has a large amount of QBAI, making a GILTI high-tax exclusion election could end up in a resulting loss of that QBAI and potentially increase the GILTI tax amounts that were generated by the low-tax CFC’s tested income. Additionally, non-corporate US shareholders need to consider whether electing the GILTI high-tax exclusion would impact investments in US properties.

If you are a US taxpayer interested in starting a business in a foreign country or are looking to analyze the benefits/drawbacks of the CFC’s current structure, it is important to consult a qualified tax accountant to determine the merits of forming a CFC to claim the GILTI high-tax exclusion. A qualified tax accountant will provide tax planning options to offer the most advantageous foreign business structure. For any international tax planning services, please contact [email protected].

» Download Is the GILTI High Tax Exception a Benefit for Controlled Foreign Corporations?