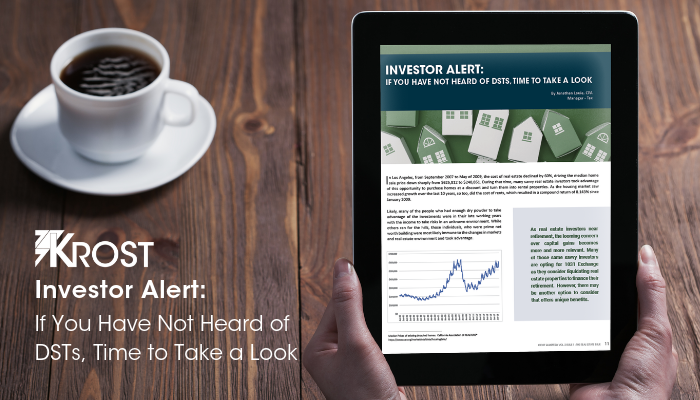 Below is a preview of one of the articles in the new KROST QUARTERLY Real Estate Issue, titled "Investor Alert: If You Have Not Heard of DSTs, Time to Take a Look" by Jonathan Louie, CPA.

In Los Angeles, from September 2007 to May of 2009, the cost of real estate declined by 60%, driving the median home
sale price down sharply from $625,812 to $248,851. During that time, many savvy real estate investors took advantage
of this opportunity to purchase homes at a discount and turn them into rental properties. As the housing market saw
increased growth over the last 10 years, so too, did the cost of rents, which resulted in a compound return of 8.143% since
January 2009.

Likely, many of the people who had enough dry powder to take advantage of the investments were in their late working years with the income to take risks in an unknown environment. While others ran for the hills, those individuals, who were prime net worth building were most likely immune to the changes in markets and real estate environment and took advantage.

Dealing with Capital Gains
If an investor sold their property outright and pocketed the gains, they could pay upwards of 20% tax on the capital gains and would have to recognize ordinary income on a portion of the gain for any depreciation that was taken (which could be significant). Many people, especially in Southern California, have opted to...