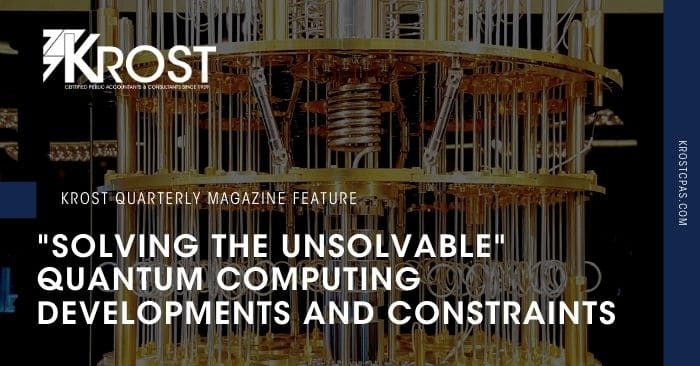 This is a preview of one of the articles in the new KROST Quarterly Technology Issue, titled “Solving the Unsolvable” Quantum Computing Developments and Constraints” by Paren Knadjian

The computing ecosystem has had deep influences on society and changed lives in a myriad of ways. Despite decades of impressive Moore’s Law performance scaling, there are still important potential applications of computing that remain out of reach of current conventional computer systems. Specifically, there are computational applications whose complexity is so immense that conventional computers, even supercomputers, do not have the computational power or memory capacity to solve them.

Conventional computers are restricted by their use of bits, represented by 1s or 0s. Quantum computers tap into the counterintuitive world of quantum mechanics by using quantum bits or qubits. Qubits can encode information as 1s and 0s, or both at the same time, using a quantum mechanics phenomenon known as superimposition. Think of the analogy of a coin. If you throw it in the air and let it fall, it will either land on heads or tails. But if you spin it fast enough, it can be both values at the same time. But that’s not all—quantum computers us… Continue here »

Paren is the practice leader of the M&A and Capital Markets group at KROST. He comes with over 20 years of experience in mergers and acquisitions as well as equity and debt financings. In that time, Paren successfully completed over 200 M&A and Capital Markets transactions worth over $1 billion, acting as both a buy-side and sell-side advisor. » Full Bio