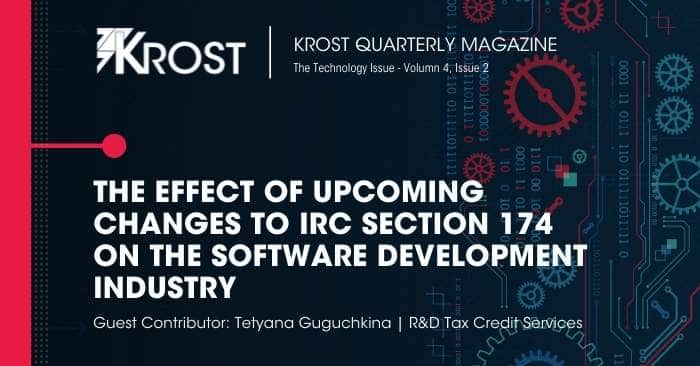 This is one of the articles in the KROST Quarterly Technology Issue, titled “The Effect of Upcoming Changes to IRC Section 174 on the Software Development Industry” by Guest Contributor, Tetyana Guguchkina.

Research and development (R&D) and innovation have historically driven the US economy’s growth and prosperity. Recent legislation, including the Tax Cuts and Jobs Act (TCJA) and the Protecting Americans from Tax Hikes (PATH) Act, has created a favorable environment for small, mid-size, and large companies to benefit from the R&D Tax Credit. Software development is one of the common industries taking advantage of the credit to increase market value and lower their effective tax rates.

There are various classes of qualifying research and experimental (R&E) expenditures and activities that may be considered qualified. R&E are expenditures paid or incurred during the tax year in connection with the taxpayer’s trade or business. R&E represents research and development costs in the experimental or laboratory sense (i.e., for activities intended to discover information to eliminate uncertainty concerning the capability, method, or design for developing or improving a product or process).

IRC Section 174 generally includes all costs incurred in the development or improvement of a product and extends beyond “qualified research expenses” under IRC Section 41. For example, IRC Section 174 costs can include the costs of obtaining a patent.

Current law in effect for R&E paid or incurred in tax years beginning before January 1, 2022 allows taxpayers to:

When it comes to software development costs, under Rev. Proc. 2000-50, they could be any of the following:

Significant changes to IRC Section 174 are coming into effect for the tax years beginning on or after January 1, 2022. The new rules will require R&E expenditures to be capitalized and amortized beginning at the midpoint of the tax year incurred, over:

Software development costs will be included in the definition of R&E expenditures under IRC Section 174 and Rev. Proc. 2000-50 will only be applicable to software acquisition costs. The new 174 rules state that R&E expenditures include “any amount paid or incurred in connection with the development of any software.”

Furthermore, under the new rules going into effect, if a company has abandoned capitalized R&E expenditures, they are longer allowed to write those expenditures off and must continue to amortize those expenditures. This rule is contrary to other provisions in the IRC relating to abandonment costs, such as IRC Section 165.

It may be beneficial for taxpayers to start tracking IRC Section 174 expenditures:

We are encouraging taxpayers to get ahead of the game and start re-evaluating IRC Section 174 expenditures now, for immediate and long-term tax planning.