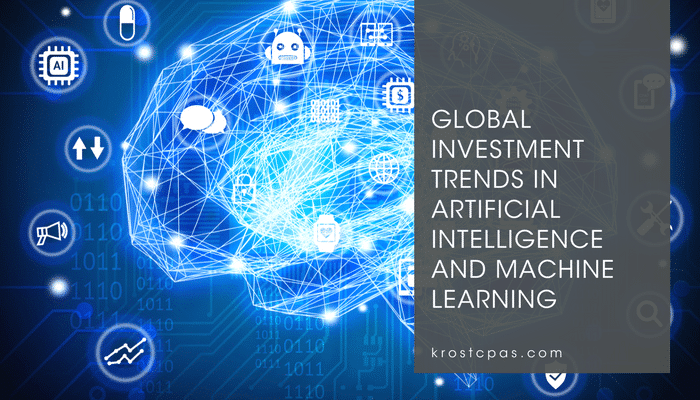 Before diving into global investment trends in Artificial Intelligence (“AI”) and Machine Learning (“ML”), it may be worth quickly defining them. To quote John McCarthy, widely recognized as one of the pre-imminent leaders in this space, AI is defined as “The science and engineering of making intelligent machines.” AI systems can perform tasks that normally require human intelligence, such as visual perception, speech recognition, decision-making, and language translation.

Machine Learning is a subset of AI. The main characteristic that separates Machine Learning from most AI is its ability to modify itself when exposed to more data; i.e. Machine Learning is dynamic and does not require human intervention to make certain changes. According to Arthur Samuel, another pioneer in this space, machine learning is “A field of study that gives computers the ability to learn without being explicitly programmed.”

AI has deeply penetrated virtually every industry from agriculture to adtech, from cybersecurity to manufacturing, from fintech to healthcare. We’re also interacting with AI in our everyday lives from giving voice commands to mobile phones to playing gesture-controlled video games. If the hype around ML is beginning to fade (perhaps overtaken by the hype on cryptocurrencies and blockchain) it may be because it has already become part of virtually every major piece of software, from calendar apps to search engines to sales management software. 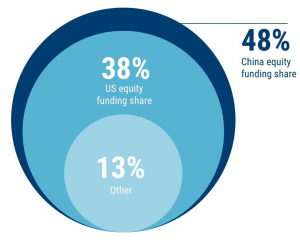 The Chinese government has a well-funded AI and ML plan that encompasses everything from smart agriculture and intelligent logistics to military applications and new employment opportunities. One area, that may alarm human rights monitors, is China’s deep investment in facial recognition technologies, a substantial$1.64 billion in 2017. One startup, Megvii, already has data on 1.3 billion faces of Chinese citizens and is backed by Chinese insurance companies (Sunshine Insurance Group), government entities (Russia-China investment group), and corporate giants (Foxconn, Ant Financial).1

The United States still dominates globally in terms of the number of AI startups and total equity deals. But it is gradually losing its global deal share. Equity deal share percentage for AI/ML for the period 2013–2017 were as follows: 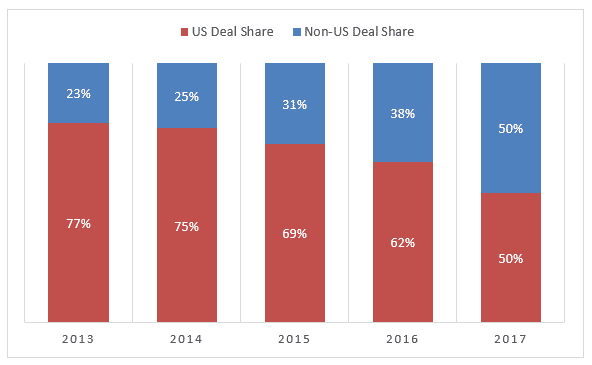 Chinese companies’ R&D efforts are also reflected in their patent activity. AI-related patent publications in China are surging far ahead of patents being published in these spaces by the US Patent and Trademark Office.

For example, in deep learning (a subset of ML), patents published in China are 6x what they are in the US.2

But the United States is no slouch. According to data derived from Pitchbook, Venture Capital investments in AI/ML for 2017 amounted to $6 billion invested across 643 deals – that is 26x the value in 2008.3

But what about M&A activity in AI and ML? As both industries are in the early years of development, it is not surprising that there has been a relative dearth of AI/ML deals until the last two years. Most of these exits are through buyouts by large strategic investors with Alphabet, Microsoft, Intel and Apple leading the way. We expect this trend to continue.

The largest exits in both 2016 and 2017 came in the autonomous driving space, with GM’s purchase of Cruise Automation for $1 billion and Aptiv’s acquisition of nuTonomy.4

So, what’s next for AI and ML? VC investments and big corporate pockets drive R&D and that investment trend shows no slowdown. For example, ML patents grew at a 34% Compound Annual Growth Rate (CAGR) between 2013 and 2017, the third-fastest growing category of all patents granted. IBM, Microsoft, Google, LinkedIn, Facebook, Intel, and Fujitsu were the seven biggest ML patent producers in 2017.5

In a recent survey conducted by MemSQL and O’Reilly Media, 61% of organizations picked AI/ML as their company’s most significant data initiative for 2018. Of those respondent organizations indicating they actively use AI and ML, 58% percent indicated they ran models in production. 6

As technologies go, AI/ML have potential use cases in virtually every industry. It will reshape the way people live and do business. For this reason, AI has been referred to as “the new electricity” by deep learning pioneer Andrew Ng. We do not expect any slowdown in Angel, VC, and Corporate investments and in Private Equity and Corporate buyout activity – perhaps even an emerging trend in IPOs for AI/ML companies, in 2018 and beyond.

Paren Knadjian is the practice leader for M&A and Capital Markets for KROST and also leads the firms national Technology Industry specialization.