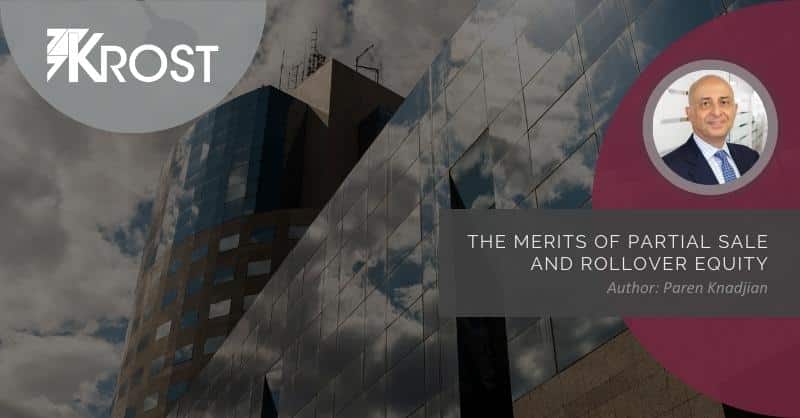 When business owners are considering the sale of their business, they tend to make two assumptions that limit their options – sell to a strategic buyer and sell 100% of their company.

Let’s look at the first assumption. It is true that many M&A deals involve the sale of one corporation to another corporation, but this does not paint the whole picture. In the last 12 months, approximately 25,600 companies were sold to other corporations for an aggregate value of $3.05 trillion1. These numbers only include control transactions i.e., no minority deals or joint ventures. However, in the same period, approximately 14,200 companies were sold to Private Equity (PE) Funds for an aggregate value of 1.31 trillion1. These numbers also exclude minority investments and investments by Venture Capital Funds. That 36% number for Private Equity is a little lower than in 2021 when PE deals represented just over 40% of all control M&A deals.

Now onto the second assumption. Selling 100% of a business ensures a complete shareholder exit and most of the time, results in a cash-out. However, in many cases, selling a majority (say 60%-80%), but not 100% of the company may result in a greater return.

First, they find a target in a sector they are interested in and create a holding company (HoldCo) which they initially own 100% of. When buying the target, they pay the shareholders of the target in cash plus equity in HoldCo. Structurally, the selling shareholders are swapping shares of their company for a combination of cash and shares in HoldCo. The result of this first transaction is that the PE Fund owns a majority, say 60% of the target, and the shareholders of the selling company own 40%. This 40% is often referred to as Rollover Equity. The selling shareholders may sell their equity for a disproportional amount of cash vs. Rollover Equity because what the PE Fund is most concerned with is that the management of the company has skin in the game. Therefore, passive shareholders often cash out completely, whereas management shareholders may roll over a larger percentage. That first purchase by the PE Fund is often referred to as the Platform acquisition because the HoldCo typically buys more businesses to integrate into that platform. These subsequent purchases are referred to as add-ons or tuck-ins. This M&A strategy is one of the key ways PE firms grow their portfolio companies. At some point, typically five years after the purchase of the Platform, the PE Fund will sell the HoldCo – often to a strategic, sometimes to a larger PE Fund, and occasionally in the form of an Initial Public Offering (IPO). All the Rollover Equity holders, as well as the PE Fund, exit, and cash out in this transaction. So, Rollover Equity holders get two exits – first the sale of their majority ownership and, second, when the HoldCo is sold. 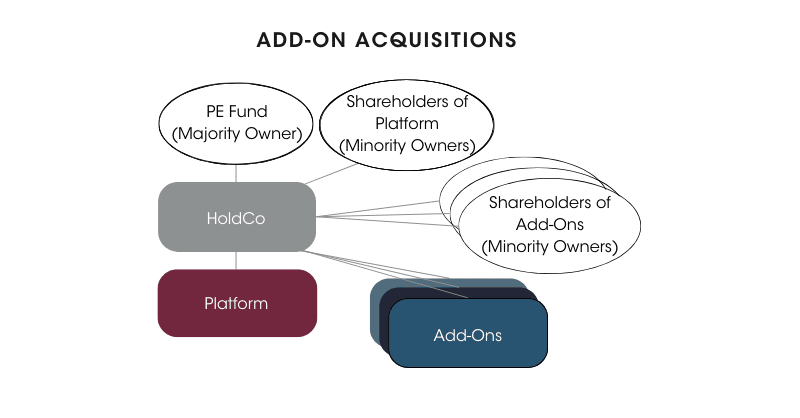 When the owner of a clinic for the treatment of Autism Spectrum Disorder (ASD) approached the KROST M&A department, he believed that his only option was to sell to another clinic or a larger medical institution. The clinic, which uses cognitive behavioral therapy, had a reported annual EBITDA of $1.7 million. After reviewing the financials and adding back excess owner’s compensation, related party transactions, and non-operational/one-off expenses, the KROST team calculated an adjusted EBITDA of $5.1 million. Once the Confidential Information Memorandum (CIM) and other sell-side materials had been created, the M&A team reached out to over 120 strategic and Private Equity buyers. At least 70 parties expressed interest, signed confidentiality agreements, and received the CIM. After several discussions with each party, the KROST team received 12 written offers to purchase the company in the form of Indications of Interest. After doing management presentations and site visits to a subset of that group, six Letters of Intent were received, and the chosen buyer was a Private Equity Fund. The deal valued the clinic at $40 million, a 7.8x EBITDA multiple, and the structure was 80% cash, and 20% Rollover Equity. The client received $32 million in cash at close, and this represented the PE Platform purchase. Current management remained in place and received further equity through a stock option plan.

The PE Fund bought five additional synergistic businesses in four years, and the business also grew organically through improved marketing. The benefits were not just to the shareholders – more than five times as many children were able to get treatment through health insurance because of improved billing methods and systems. In the sixth year, the PE Fund sold the Platform and all the add-ons, which had been integrated into one business with a single strong brand, to a national medical hospital system. The deal was an all-cash $357 million transaction, which represented an 11.5x EBITDA multiple. The client’s ownership had been diluted to 14% because of the add-on acquisitions, but after the debt had been paid off, he made $48 million for this second transaction. With the $32 million for 80% in the first transaction, he made a total of $80 million, which was all taxed as capital gains. Incidentally, in the five years prior to the first transaction, he had made approximately $2 million per year, resulting in a total of $10 million – all taxed as ordinary income.

When contemplating a sale of a business, owners should consider multiple options, including:

If the right PE Fund is interested, and assuming they have a proven track record, a majority transaction with Rollover Equity will allow selling shareholders two bites of the cherry and a probable greater return than a one-off sale.

Contact us for any questions regarding M&A and Capital Markets.

» Download The Merits of Partial Sale and Rollover Equity

Paren is the Principal of the M&A and Capital Markets group at KROST. He comes with over 20 years of experience in mergers and acquisitions as well as equity and debt financings. In that time, Paren successfully completed over 200 M&A and Capital Markets transactions worth over $1 billion, acting as both a buy-side and
sell-side advisor. » Full Bio