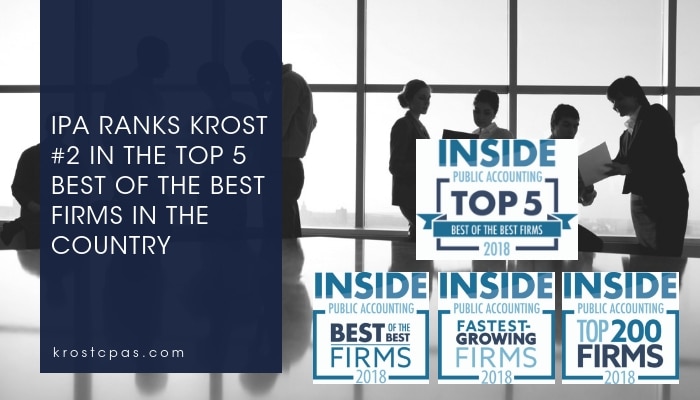 These awards come a month after being awarded the following:

IPA’s annual Best of the Best recognition honors CPA firms across the country for their superior financial and operational performance based on more than 70 criteria. IPA’s annual rankings of the 300 largest firms in the U.S. are listed from the multi-billion-dollar Big 4 to firms of roughly $10 million in net revenue. The list includes firm headquarters, MP, net revenue, ranking in the previous year, and percentage change. The rankings are compiled from data gathered in the annual IPA Survey and Analysis of Firms, which attracts participation from nearly 600 firms.

IPA 100, 200 and 300 firms are ranked by U.S. net revenues and are compiled by analyzing the more than 550 responses received this year for IPA’s Survey and Analysis of Firms. This is IPA’s 28th annual ranking of the largest accounting firms in the nation.

In 1994, IPA began naming the top 50 Best of the Best Firms in the U.S., selected exclusively on their performance in specific areas of management, growth and strategic vision. The Best of the Best firms are some of the highest-performing public accounting firms in the country.