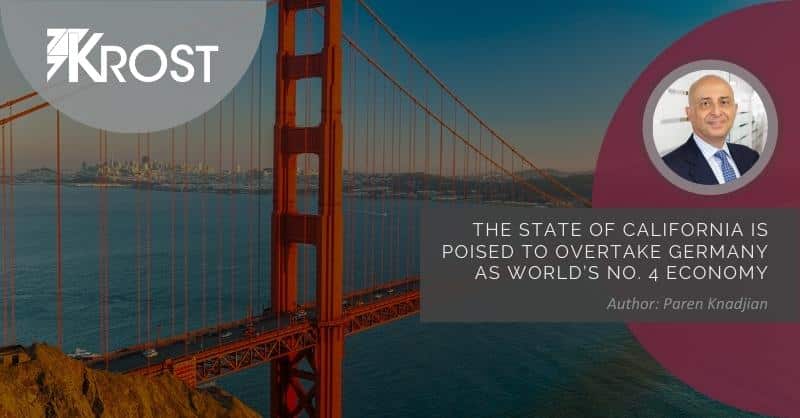 California residents are used to hearing, and oftentimes experiencing, negative consequences for living in the Golden State. Whether it be earthquakes, forest fires, homelessness, or drought, we also seem to be surrounded by a stream of news about businesses fleeing California for the lower tax and regulation-lite states of Texas, Nevada, or Arizona.

However, contrary to popular belief, the economy of California has proven resilient. The state has outperformed its U.S. and global peers by quickly adapting through the pandemic and now dealing with the current period of high inflation. In addition, the state’s Gross Domestic Product (GDP) is poised to overtake Germany as the fourth largest in the world after the United States, China, and Japan. California has already surpassed France and Brazil in 2015 and displaced the fifth-largest economy, the United Kingdom, in 2017. Although most of California’s economic figures won’t be published until the beginning of 2023, estimates suggest the state may have already caught Germany, with at least one forecast implying California is ahead by $72 billion when considering the state’s recent growth rate.

California’s trajectory is most transparent in the growing divergence between its 379 companies with a market value of at least $1 billion, and the 155 public firms based in Germany meeting a similar size benchmark. Whereas corporate California revenues and market capitalization rose 147% and 117% respectively, Germany mustered inferior gains of 41% and 34% in the past three years. The margin of Germany’s GDP of $4.22 trillion over California’s $3.357 trillion last year was the smallest on record and is about to disappear with Europe’s largest economy barely growing in 2022 and forecasted to shrink in 2023.

California outperforms the U.S. and the rest of the world across many industries. That’s especially true with renewable energy being the fastest-growing business in both California and Germany. The market capitalization of California companies in this business increased 731%, or 1.74 times more than their German counterparts, within the past three years.

The dichotomy between corporate California and corporate Germany is most pronounced in their top three industries. California’s technology hardware, media, and software companies saw sales increase 63%, 95%, and 115% in the past three years, boosting market valuations by 184%, 54%, and 58%. Germany’s health care, consumer discretionary, and industrial products were erratic with a 43% increase and declines of 2% and 7% during the same periods. Market values rose a paltry 40%, 8%, and 10%.

California’s three-to-one growth advantage is similarly reflected in a comparison of the top 10 companies. Firms led by Google parent companies (Alphabet Inc., Apple Inc., and Visa Inc.) will see revenues rise 8% following last year’s 34% increase as they turn $100 of sales into $49 of profit. They also increased their employment by 10%. Germany (led by SAP SE, Deutsche Telekom AG, and Siemens AG) will sell 4% more of its products in 2022, down from a 10% increase in 2021, while generating $44 of profit from every $100 of sales. The German workforce declined by 2% on average.

In addition, when you consider California’s population of 40 million people as compared to China’s 1.4 billion, the entire United States of 340 million, Japan’s 124 million, and Germany’s 84 million, its economy is punching well above its weight on the world stage. Job creation is a particularly strong area with unemployment falling to 3.9% in July – the lowest since data was compiled in 1976 before rising to 4.1% in August. The gap separating California from the U.S. national rate of 3.5% is the narrowest since August 2021, and for the first time since 2006, California’s joblessness dipped below Texas (the largest two states for non-farm payrolls). The state’s jobless rate similarly outperformed Germany by almost a percentage point, the most since February 2020.

Admittedly, Germany has suffered greatly from the war in Ukraine, but all the same, the rise of California’s economy certainly defies the narrative of a troublesome place to live and work.

As California’s 40th Governor, Gavin Newson, was recently quoted as saying, “The California dream is still alive and well.”

Contact us for any questions regarding M&A and Capital Markets.

» Download The State of California is Poised to Overtake Germany as World’s No. 4 Economy

Paren is the Principal of the M&A and Capital Markets group at KROST. He comes with over 20 years of experience in mergers and acquisitions as well as equity and debt financings. In that time, Paren successfully completed over 200 M&A and Capital Markets transactions worth over $1 billion, acting as both a buy-side and
sell-side advisor. » Full Bio