PRESS RELEASE: October 17, 2016
Krost, Baumgarten, Kniss & Guerrero announced that the company will change its name to KROST and launch a newly designed logo effective October 17, 2016. In conjunction with the rebrand launch, KROST and its affiliated tax consulting practice were recently recognized by INSIDE Public Accounting as the Fastest-Growing Best of the Best Firm out of more than 540 top accounting firms nationwide for 2016.

Over the last year, KROST saw a tremendous growth rate of 66.3%. With this significant growth came a desire to revive the brand with a fresh, modern look to represent the evolving business. The principals of KROST agree that this new, exciting chapter in the company’s history marks a significant shift, but that the core values of the firm remain the same.

“Maintaining our founding principles is a key factor in the success leading up to this year, as we expanded both the services we offer, as well as our geographic reach. Growth like this doesn’t happen overnight. It’s taken us years of laying groundwork. We are thrilled to start 2017 off with a new brand that not only reflects all that is new with the company, but just how far we’ve come and how we got here,” said Greg Kniss, Managing Principal.

INSIDE Public Accounting generates the Best of the Best list using an algorithm of more than 70 metrics to track everything from training and turnover to costs and compensation. With the rebrand launch and recent accolades, KROST anticipates another great year and, according to leadership, the company’s current and future success can be attributed to one major factor: their team.

“Being selected and recognized as a top firm in this industry, is an honor and a privilege, but behind the numbers, the real key is getting the right people on board, and we feel we’ve done a great job in that area. We really do have an amazing group of talent assembled,” remarked Kniss. 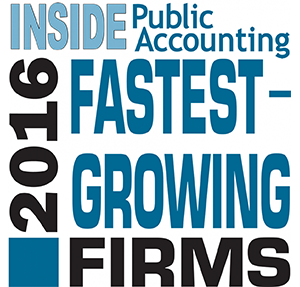