The Foodservice industry continues to have a large footprint in the American Economy.

The Restaurant Industry annual sales are expected to reach $799 Billion in 2017 and currently employs 14.7 Million people. That means 14 percent of all retail sales and 11 percent of all jobs in the United States come from the Restaurant/Food Service sector.

This is a healthy 4.3% gain (1.6% when adjusted for inflation) in sales over the Previous Year.

In California, it is even more impactful. Food Preparation & Service is second fasting growing employment group (behind Personal Care aides) at over 330,000 new jobs created every year, with California on pace in 2017 to have Restaurant Sales of $82.2 billion with Texas a distant second at $54.1 billion.

Specialization has been the trend in both full and quick service concepts, the “one shop-giant menu” has taken a back seat to the specialists with examples like XO Marshmallow in Chicago, which is focused on, you guessed it, marshmallows, to Smoke’s Poutinerie which specializes in 30 varieties of the Canadian classic dish of French fries covered in gravy and topped with cheese curds. They have opened in Hollywood, and are slated to open a whopping 800 more units across the U.S. by 2020.

Some of the Menu trends for 2017 include:

Challenges and the Good News

The biggest new obstacle to foodservice operators, especially on the West Coast (but coming to a town near you, eventually) is the rising minimum wage. The increasing labor cost are forcing operators to make tough decisions, in Los Angeles where the Minimum wage is slated to reach $15 per hour by 2020, full-service restaurants are scaling back the “non-sales” personnel like bussers and runners, and designing a more frictionless experience where food servers and hosts handle all the operations.

QSR operators have fewer choices, they don’t generally have gratuities to help supplement the wage, so the competition for those jobs is fierce. One increasingly common solution is the use of technology in the form of Kiosks instead of cashiers (McDonald’s), Mobile applications and order Bots that allow you to place your order through your phone with a text message.

The second challenge is that due to the increasing expenses and costs, Menu prices have been rising much faster the Grocery store prices-which can drive consumers to alternate “food away from home” choices. Whole Foods Markets looks to be a big winner after its acquisition by Amazon, the retail giant has already begun dropping prices and is looking to expand its replacement meal selections. 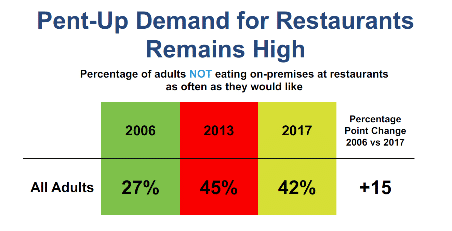 But there is good news in the restaurant/food service segment. Surveys indicate that there is a high Pent-up demand for restaurants. 42% of those asked said they are NOT eating on-premises at restaurants as often as they would like. If the current positive economic indicators continue (low unemployment and growing GDP) we can expect increased traffic and sales.

June 2017 sales and traffic growth were the best monthly performance since January 2017, which were up from 2016.

The Demise of the Full-Service Restaurant was a little premature as Quick Service Sales have flattened out and the only two sectors to show positive growth were Fine Dining and Upscale Casual.

So, with all the obstacles, changes and issues, the vibrant Foodservice industry is slowly looking up, and it is a poetic irony that segment that started it all, the independent restaurateurs, will likely be the ones to lead the chargeback.