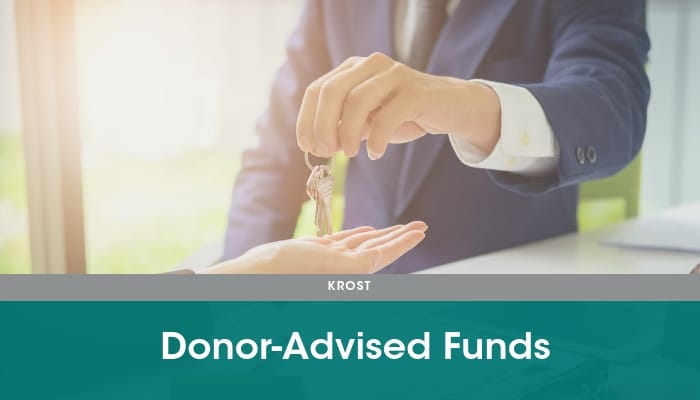 A donor-advised fund (DAF) is a charitable giving vehicle administered by a public charity created to manage charitable donations on behalf of organizations, families, or individuals. A DAF enables a taxpayer to contribute personal assets, including cash, securities, and real estate, to an investment account, in which the assets grow tax-free. The taxpayer receives an immediate tax deduction in the amount of the fair market value of the assets contributed to the DAF. However, the taxpayer does not need to immediately decide which charities to support when he/she contributes the assets. Rather, the assets can potentially grow in the DAF based on the taxpayer’s investment preferences, creating even more money to give to charities in the future. Although the taxpayer surrenders ownership of the assets contributed to the DAF, he/she retains advisory privileges over how the assets are invested and the eventual distributions to charities.

The founders or board members of a private foundation have complete control over where its giving goes within broad legal bounds. In a DAF, the donor may only advise the sponsoring organization where the money should go. While rare, a sponsoring organization could conceivably ignore the donor’s intent. In addition, most DAFs can only give to IRS certified 501(c)(3) organizations or their foreign equivalents. This rules out most types of donations to individuals and scholarships, which private foundations can do more easily.

DAFs also provide certain advantages over direct giving. While DAFs allows donors to contribute securities and other illiquid assets, many individual charities are not set up to receive donations of such assets and only take cash. Some DAFs allow gifts to foreign charities, while direct gifts to foreign charities by individuals are generally not tax deductible. In addition, a DAF gives the donor an immediate tax deduction but provides the donor with the option of deciding later which charities will be the beneficiaries. Lastly, a DAF eliminates the administrative burden of a donor who wishes to make small donations to numerous charities. For example, donating 100 shares to a DAF with 20 separate grant recommendations is a much more convenient than donating 5 shares each to 20 separate charities.

When a taxpayer donates appreciated securities or other assets to a DAF, he/she not only gets an immediate tax deduction in the amount of the fair market value of the contributed assets, but he/she also avoids capital gains tax on the disposition of those assets, which could be as high as 23.8% on the Federal tax return alone.

Matthew Weber, CPA, MAcc, Director
Tax, Financial Services Sector, Hospitality
Matthew Weber is a Director at KROST. He has been with the firm’s tax practice since July 2015 and has worked in public accounting since 2010. Before joining the firm, Matthew was a Tax Manager at PricewaterhouseCoopers in Los Angeles. Matthew’s areas of expertise include federal and multi-state tax compliance and consulting for individuals, corporations, and partnerships. » Full Bio