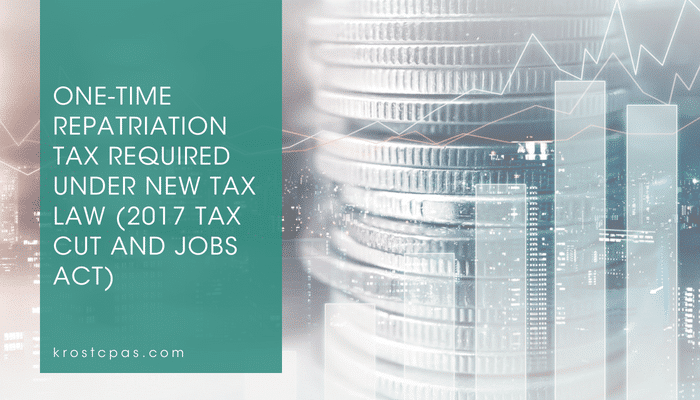 The 2017 Tax Cut and Jobs Act (“TCJA”) made significant changes to how businesses and individuals are taxed. Among the changes is how U.S. corporations are taxed on foreign income. As a result, U.S. shareholders directly or indirectly owning 10% or more of foreign corporations may be subject to a mandatory one-time repatriation tax for a deemed dividend created by the new tax law. Unlike most TCJA tax changes, this change impacts the 2017 tax year. If you directly or indirectly own 10% or more of a foreign corporation, you may be subject to this tax.

The tax is levied on undistributed earnings and profits of certain U.S.-owned foreign corporations that have not been previously taxed. An election is available to pay the one-time repatriation tax over an eight-year period. The first five payments are 8% of the repatriation tax amount and escalate in the last three years to 15%, 20%, and 25%, respectively. Generally, payments are due by the taxpayer’s tax return due date (without extension). However, S corporation shareholders may make a special election to defer payment until the tax year in which certain events occur, e.g., termination of the S corporation status, liquidation, or transfer of the S corporation stock.

Domestic pass-through entities are required to provide their investors with the required IRC § 965 information by attaching a statement to their Schedule K-1s. We encourage you to contact the pass-through entity that holds the shares of a foreign corporation should you have any questions or doubts as to whether you are subject to the repatriation tax and, if so, whether the issue has been properly addressed.

The rules related to the repatriation tax are complex. Consequently, the information contained in this article is general in nature and is merely intended to inform you of this one-time tax.

The applicability of this transition treatment should be considered relative to the preparation of your 2017 income taxes.

If your 2017 federal income tax return is on extension, you must include the applicable amount in income and file your tax return by October 15, 2018, to take advantage of the election to pay the tax over an eight-year period.

If you have already filed your 2017 tax returns, you may need to file an amended return by October 15, 2018, in order to include the applicable amount in your 2017 income and to take advantage of the election to pay the one-time tax over an eight-year period.

Given the time constraints, you should determine whether the repatriation tax is applicable to you, and what information is needed to prepare your 2017 original/amended income tax return and timely file the election to make annual installments. As noted, failure to timely file the IRC § 965 election disqualifies you from spreading the tax payment over eight years. The first installment may be made as late as April 15, 2019 (the due date for the second installment), although interest would accrue from April 17, 2018. You will need to decide whether you opt to postpone the first installment beyond the extended due date of your 2017 federal income tax return. Failure to pay both the first and second installment by April 15, 2019, triggers an immediate acceleration of all remaining installment payments.