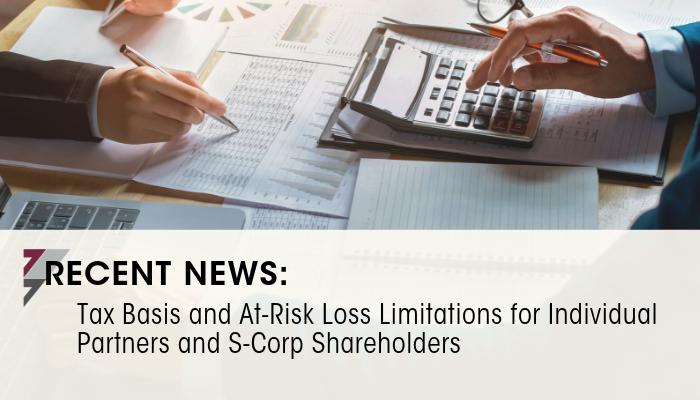 Taxpayers need to take their losses through four different loss limitations before one can claim the deduction:
1) Basis limitations
2) At-risk limitations
3) Passive activity loss limitations
4) The new limitation on excess business losses of non-corporate taxpayers enacted in the Tax Cuts and
Jobs Act of 2017

In this article, we will go over two: the basis limitation rules and the at-risk limitation rules. Per IRC §704(d), a taxpayer will need to determine if they have enough basis to take the deduction; thereafter, the taxpayer should follow the IRC §465 at-risk rules to calculate any limitations. In 2018, the taxpayer will need their losses to satisfy all the requirements of each limitation to fully deduct their losses. If not, the losses will be suspended in their respective baskets. There are several planning strategies taxpayers may use to maximize their losses.

Even though the business may not be profitable during the year, it may be a good tax planning strategy to incur debt to increase the adjusted basis and be able to utilize those suspended losses. During a certain year, a taxpayer may also consider accelerating the recognition of income or deferring expenditures to a later year and generate enough income to offset the prior years’ suspended losses.

A remarkable aspect of tax shelters prior to 1976 was that taxpayers were allowed to deduct losses that were greater than their investment in the activity. With the enactment of the IRC § 465 at-risk limitation rules effective for years beginning in 1976, individuals (partners of partnerships and shareholders of S corporations), estates, trusts, and closely held corporations (more than 50% ownership in C corps) that incur deductions of business or investment losses from an activity are now limited to the amount the taxpayer is “at-risk.” To be considered “at-risk”, the taxpayer must invest their own personal funds to the activity or they can incur a personal liability for borrowed funds. Per IRC § 465(b), the at-risk amount includes: the amount of money and the adjusted basis of property contributed to an activity, amounts borrowed to the extent the taxpayer is personally liable, and qualified non-recourse financing. A taxpayer can deduct loss amounts up to the at-risk limitations in any given tax year and any unused portion can be carried forward until there is enough positive at-risk income to allow the deduction.

These rules do not limit the deductibility of all deductible expense arising from an active, but rather they limit the deductibility of losses. The amount at-risk can go negative resulting in the recognition of previously deducted losses as income and is known as an at-risk recapture pursuant to IRC § 465(e). This can be a result of excess distributions to the taxpayer or changes in the status of loans from recourse to non-recourse.

There are a few tax planning ideas to get around the at-risk limitations. A taxpayer could aggregate their activities if he or she actively participates in the management of the trade or business or if such trade or business is carried on by a partnership or an S-corporation and 65% or more of the losses for the year is allocable to persons who actively participate in the management of the trade or business pursuant to IRC § 465(c)(3). One could potentially combine losses from one activity with the net profits from another and be treated as a single activity for purposes of the at-risk rules. The taxpayer may then have no net loss from the activity to be limited under IRC § 465. Congress left the IRS to decide whether all other business and income-producing activities should be segregated or aggregated depending on the tax shelter characteristics. Proposed regulations failed to address these issues and we are left to decide based on the facts whether certain activities should be aggregated.

Another strategy in navigating the at-risk rules is being aware of the taxpayer’s tax basis and amount at-risk and then taking measures to increase these amounts prior to an anticipated event before the end of the taxable year. One notable action that can be taken is guaranteeing a portion of partnership or s corporation debt which will increase a partner’s or shareholder’s amount at-risk since he would be personally liable for his share of recourse debt.

Taxpayers need to go through the four types of limitation hurdles before being able to deduct their losses: basis limitations, at-risk limitations, passive loss rules, and the new excess business loss limitations. At the end of the day, these loss ordering rules are not always that straightforward because they can cause huge headaches for unsuspecting taxpayers when income recognition results. Proper tax planning and a close monitor of tax basis are some of the key ways in successfully getting over the Code’s four hurdles.

Aric Wong, CPA, MBT, Senior Manager
Tax, Hospitality
Aric is a Tax Manager in the Tax department at KROST. He has been in the public accounting profession for over 7 years. His areas of expertise include tax planning and compliance for high net-worth individuals, partnerships, and corporations. He is knowledgeable in all areas of taxation including personal, corporate, partnership, nonprofit, trust, estate, and gift taxation. » Full Bio