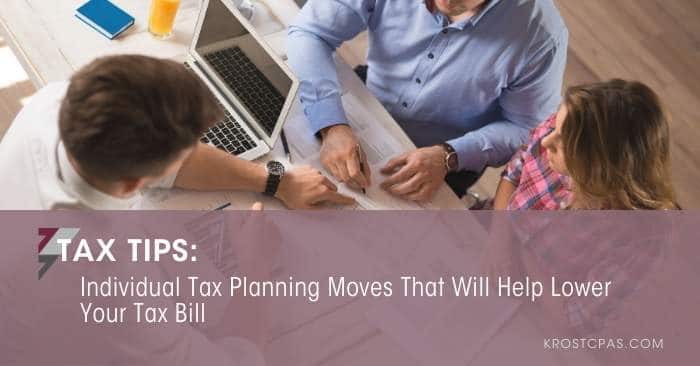 As the end of the year approaches, it is a good time to think of planning moves that will help lower your tax bill for this year and possibly the next.

Year-end planning for 2019 takes place against the backdrop of the 2017 Tax Cuts and Jobs Act that had major changes in the tax rules for individuals. There were new, lower income tax rates, a substantially increased standard deduction, severely limited itemized deductions and elimination of personal exemptions, an increased child tax credit, and a watered-down alternative minimum tax (AMT), among many other changes.

In response to these changes, our office can help you prepare an effective strategy to lower your tax bill. The earlier we get started, the greater the potential maximization of benefits. We have compiled a checklist of actions based on current tax rules that may help you save tax dollars if you act before year-end. Not all actions will apply in your particular situation, but you (or a family member) will likely benefit from many of them. We can narrow down the specific actions that you can take and once we meet with you, we can tailor a particular plan. Please review the following list and contact us at your earliest convenience so that we can advise you on which tax-saving strategies may be beneficial to you. 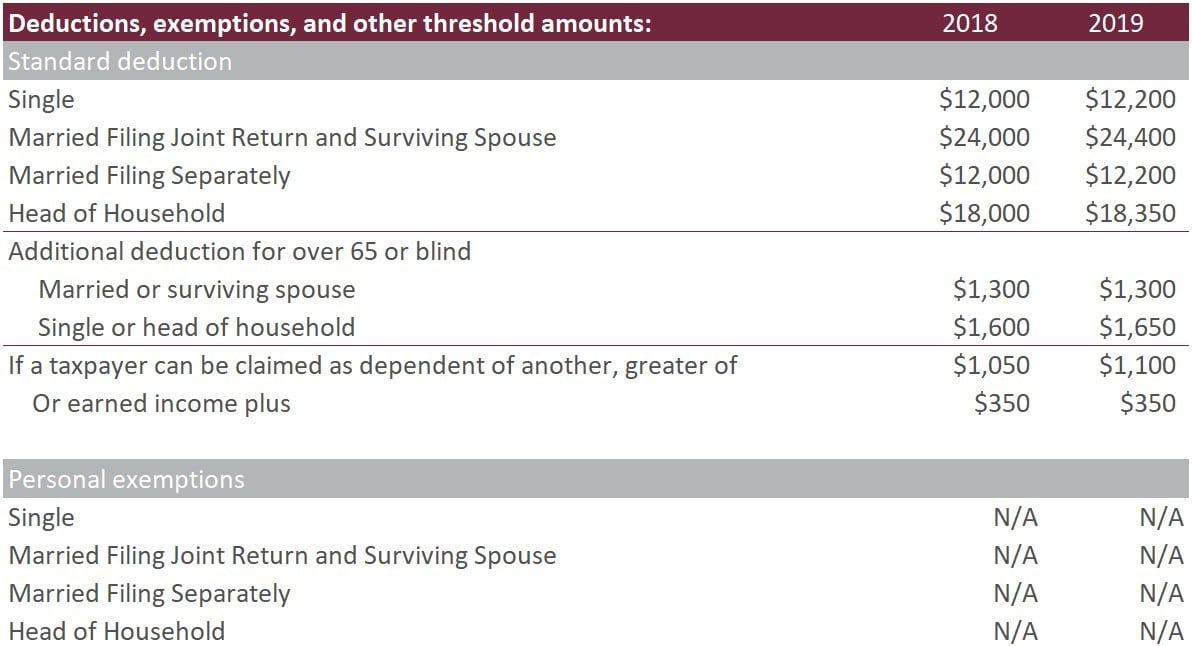 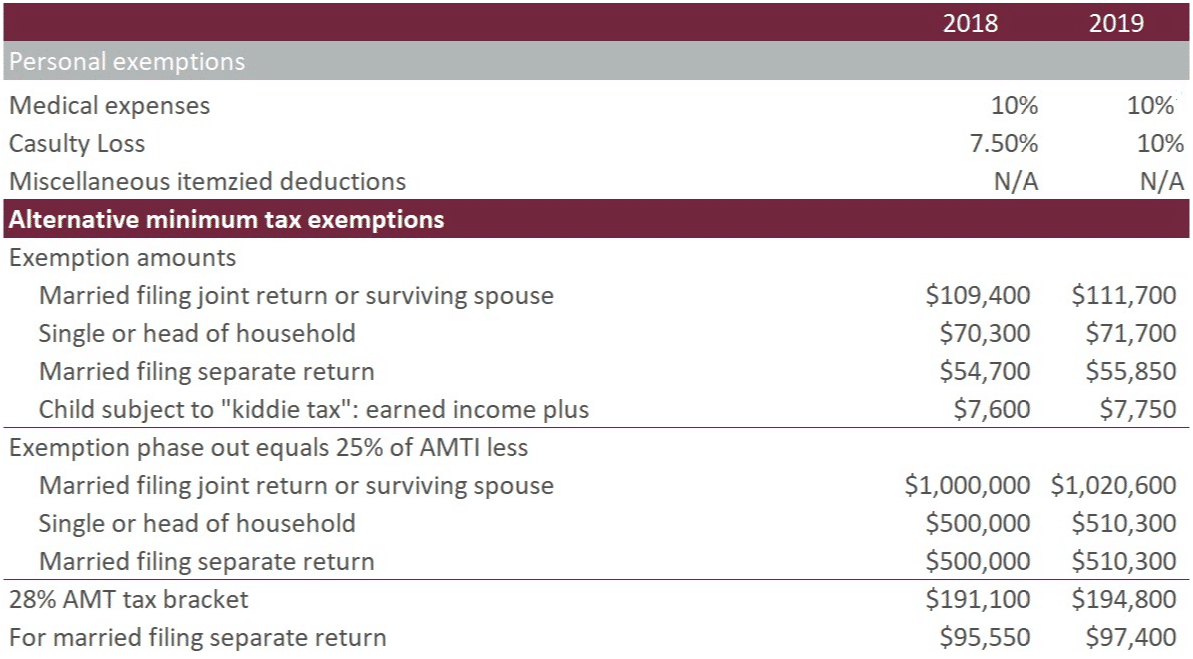 New Deduction for Pass-through Entities (“199A Deduction”)
An individual, trust, and estate may deduct up to 20% of certain domestic qualified business income (QBI) from a sole proprietorship, partnership, and S corporation for tax years beginning after December 31, 2017, and before January 1, 2026. The QBI deduction, also known as the “pass-through deduction,” is generally the lesser of combined QBI or 20% of the excess (if any) of taxable income over net capital gain.

Donating IRA Distributions to Charity
The PATH Act made permanent the ability of individuals of 70-1/2 years or older to exclude from gross income qualified charitable distribution from IRAs of up to $100,000 per year. On the other hand, no donation deduction is allowed. This is an extremely useful tool under the TCJA as lesser taxpayers will be itemizing due to an increase of standard deductions and various limitations put on itemized deductions.

Net Investment Income Tax
A 3.8% surtax applies to the lesser of (1) net investment income or (2) the excess of modified adjusted gross income (MAGI) over the threshold.

MAGI is adjusted gross income (AGI) increased by the amount excluded from income as foreign earned income (net of the deductions and exclusions disallowed with respect to the foreign earned income). The 3.8% surtax applies to gross income from interest, dividends, annuities, royalties, and rents unless those items are derived in the ordinary course of a trade or business to which the tax doesn’t apply. The tax also applies to income generated from a trade or business if it is a passive activity of the taxpayer. Hence, the tax doesn’t apply to active businesses conducted by a sole proprietor, partnership, or S corporation. Investment income does not include any amount subject to the self-employment tax and doesn’t include amounts distributed from retirement plans. As year-end nears, a taxpayer’s approach to minimizing or eliminating the 3.8% surtax will depend on his or her estimated MAGI and net investment income (NII) for the year. Some taxpayers should consider ways to minimize (e.g., through deferral) additional NII for the balance of the year, others should try to see if they can reduce MAGI other than unearned income, and others will need to consider ways to minimize both NII and other types of MAGI. One way to reduce NII is to recognize losses on stocks and use them to offset other gains taken earlier this year. In addition, taxpayers that own interests in several passive activities also should reexamine the way they group their activities. Taxpayers expecting significant gains on sale of property may want to consider using the installment method to spread out the taxable gain on sale if applicable.

Alternative Minimum Tax
Like the NII tax, the alternative minimum tax (AMT) also requires personalized attention. There are steps that taxpayers subject to AMT can take to reduce its effect on their tax liability. For instance, taxpayers can undertake to eliminate certain tax preferences. Certain deductions, including the accelerated depreciation deduction on real property, as well as expensed research and development costs and expensed mining exploration and development costs, are tax preference items only to the extent that they exceed an otherwise allowable deduction. However, with State and Local Tax Deductions being capped at $10,000, we are expecting much fewer taxpayers being subject to AMT. For 2019 exemption and phaseout amounts, please refer to the table above.

There could be situations where an employee may need to have more taxes withheld towards the end of the year to cover the tax. For example, if an individual earns $200,000 from one employer during the first half of the year and a like amount from another employer during the balance of the year, he or she would owe the additional Medicare tax, but there would be no withholding by either employer for the additional Medicare tax since wages from each employer don’t exceed $200,000. If you feel you do not have enough income tax withholding to cover this tax, you may request that your employer process additional withholding from your income.

Gift Tax
The annual exclusion for gifts remained $15,000 in 2019. Make gifts sheltered by the annual gift tax exclusion before the end of the year and thereby save gift taxes. The exclusion applies to gifts of up to $15,000 made in 2019 to each of an unlimited number of individuals. You can’t carry over unused exclusions from one year to the next. The transfers also may save family income taxes where income-earning property is gifted to family members in lower income tax brackets who are not subject to the kiddie tax.

The amount covered by the 65-day election is limited to the greater of:

This election is made on Form 1041. Once made, the election is irrevocable, but is binding only for that year. The 65-day election is not available for accumulation distributions.

These are just some of the year-end steps that can be taken to save taxes. Again, by contacting us, we can tailor a plan that will work best for you.