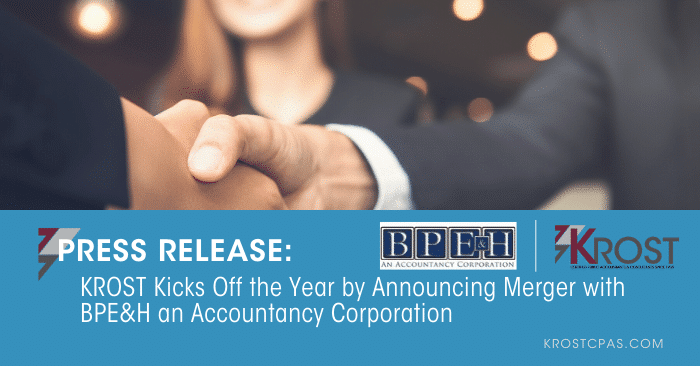 Pasadena/Woodland Hills, CA. – KROST CPAs and Consultants, a firm based out of Los Angeles, has merged in BPE&H out of Woodland Hills effective January 1, 2020. Seven principals will join the leadership team at KROST, including Scott Eisner, Martin Belak-Berger, Bob Price, Phil D’Amico, Scott Gilmore; and founding BPE&H principals Jerry Block and Jane Plant. With the addition of 30 team members total, KROST’s practice will expand to 200 team members firmwide and grow its presence in the thriving Woodland Hills area.

The new KROST management and staff will remain at the 21300 Victory Boulevard office until next summer when the two Woodland Hills office locations will move into a new space together. KROST has locations around the Greater Los Angeles area, including offices in Pasadena, West Los Angeles, Valencia, and Woodland Hills.

“Joining with KROST makes sense from a resource standpoint. We now have in-house recruiting and other corporate support systems to alleviate workload on our leadership so we can spend more time with our clients. The firm’s industry task forces are also a great complement to our manufacturing and real estate expertise. Overall, we are thrilled about this new chapter and ready to hit the ground running,” remarked former BPE&H Principal, Martin Belak-Berger.

“Merging with BPE&H made sense for us on several levels. Their mission and vision, as well as dedication to superior customer service, resonates with our core values and the principles that we stand by here at KROST. Our tax, accounting, and advisory teams will benefit from the added resources; all of which will allow us to continue to support our clients,” said KROST’s Managing Principal Greg Kniss.