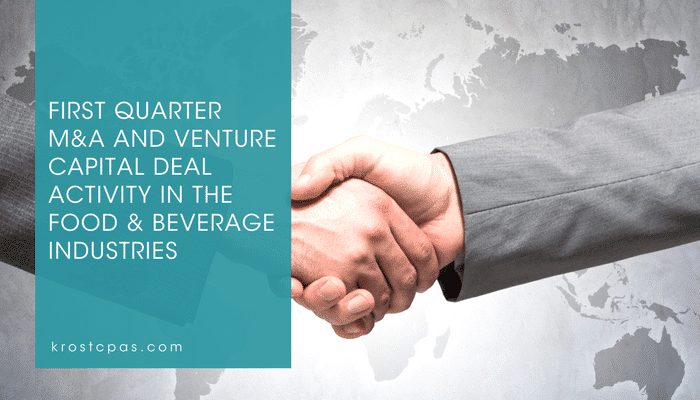 M&A activity in the Food & Beverage space remains healthy with just under 250 deals announced in Q1 2018, down from 370 deals on Q1 2017 (which was a very high quarter in terms of deal count and aggregate transaction value).

The second largest transaction was the $7.7 billion-dollar acquisition of pet product company Blue Buffalo by General Mills – an impressive 6x Revenue and 25x EBITDA multiple of the target company. Campbell Soup, on the other hand, is planning to pay an even more impressive 44x EBITDA multiple for Charlotte-based snack manufacturer Snyder-Lance. The deal was announced in December, but Snyder-Lance recently got shareholder approval for the deal, so it should close soon. Staying in the snack space, another significant deal was the $1.6 billion purchase of Amplify Snacks by The Hershey Company. Amplify’s best-known product is their Skinny Pop Popcorn brand.

Interest in producers of plant-based products remains high – an example of that was the sale of the Field Roast Grain Meat Company to Canadian Maple Leaf Foods. Dairy products producers remain active in the M&A space, with Unilever’s purchase of Romanian Berry Ice and Lactalis’s purchase of Siggis.

Given Blue Apron’s less than stellar stock market performance, it is, perhaps, surprising, to see that Sun Basket, a competing meal-kit subscription service, raised $57.8 million in a combination of debt and equity, putting the company’s pre-money valuation at $465 million. $42.8 million of the Series D equity funding was led by August Capital, $15 million of debt came from Trinity Capital Investment.

Revolution Foods, a company that provides school meals and ready-to-eat meal kits for children raised $45.98 million of Series I funding from Collaborative Fund, Revolution and PaoCapital. Another ready-to-eat meal company, Hungryroot, raised $22.82 million of Series B venture funding in a deal led by Crosslink Capital and Lightspeed Venture Partners.

Questions about expanding your restaurant business? » Contact us today