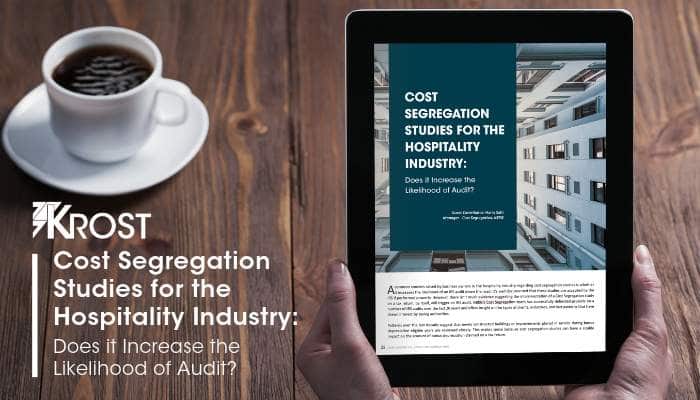 Below is a preview of one of the articles in the new KROST Quarterly Hospitality Issue, "Cost Segregation Studies for the Hospitality Industry: Does it Increase the Likelihood of Audit?" by Guest Contributor Harry Sahi, Manager - Cost Segregation, KBKG.

"A common concern raised by business owners in the hospitality industry regarding cost segregation studies is whether it increases the likelihood of an IRS audit down the road. It’s well documented that these studies are accepted by the IRS if performed properly. However, there isn’t much evidence suggesting the implementation of a Cost Segregation study on a tax return, by itself, will trigger an IRS audit. KBKG’s Cost Segregation team has successfully defended projects on a number of IRS audits over the last 20 years and offers insight on the types of clients, industries, and fact patterns that have drawn interest by taxing authorities.

Patterns over the last decade suggest that newly constructed buildings or improvements placed in service during bonus depreciation eligible years are reviewed closely. This makes sense because cost segregation studies can have a sizable impact on the amount of bonus depreciation claimed on a tax return.

For building projects placed in service in phases over multiple years where bonus depreciation eligibility rules change, taxpayers should..."

KROST Quarterly is a digital publication that highlights some of the hot topics in the accounting and finance industry. Volume 2, Issue 2 covers hospitality trends and news including California sales tax compliance, employee theft, data breaches, Wage Order 7, trends in restaurant technology, and more.