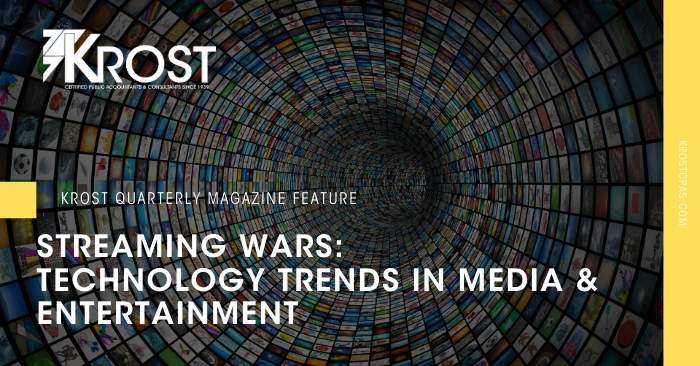 This is a preview of one of the articles in the new KROST Quarterly Technology Issue, titled “The Streaming Wars: Technology Trends in Media and Entertainment” by Paren Knadjian.

The U.S. media and entertainment (M&E) industry is the largest in the world. At $717 billion, it represents a third of the global M&E industry. It includes motion pictures, television programming and commercials, streaming content, music and audio recordings, broadcast, radio, book publishing, video games, and ancillary services and products. The U.S. M&E industry is expected to reach more than $825 billion by 2023.

What direction will this behemoth industry take in the 2020s and beyond? How will customers consume entertainment content? This is the question vexing every M&E company in the world plus the providers of broadband services, social networking, e-commerce, and consumer technology companies.

One way to be a major player in the industry is to buy other key businesses in the market. The most 360-degree player in this industry is now AT&T. With its $85 billion acquisition of Time Warner (which included Warner Brothers, TBS, TNT, HBO and CNN), it instantly became a key player in the M&E industry. It had previously acquired DirectTV for $67.1 billion in 2014. It is also investing heavily in 5G wireless, spending $982.5 million to buy 831 24GHz spectrum licenses from the FCC, excluding the costs of installing 5G equipment and infrastructure. Finally, it is a significant player in the wired broadband industry (fiber optics and copper) to home… Continue here »